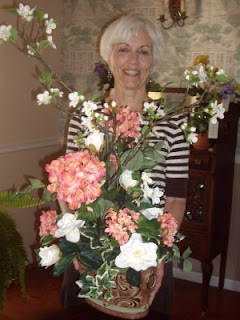 Recently 2 friends of mine stopped by to look at flowers, they had not ever met before, but after being introduced we all engaged in the kind of small talk that people do....as we were visiting I realized that something quite extraordinary was occurring....These two women, these two great mothers, had been a part of my life in the most intense time of raising children. I have four children and Jane and Denise both have two children....my four children spanned their children's lives. Jane was my dear and good friend when my older children and her children were small. Then,Denise and her children were there when my younger children were small. I didn't stop being friends with Jane, but we moved and life changes. Change can be a sad part of life....
I looked at these 2 women and realized how important they had been in my life. For starters they were both my "emergency" number on all those forms you fill out for school. Because your life is simply intertwined with your children's friend's parents we had lunches together, baseball games, football games, gymnastic meets, and endless birthday parties. We searched for missing dogs, argued with umpires and ate a lot of pizza. It was a wonderful time as I look back on it, and both of these women, although they did not know each other, passed a kind of baton in my life. Jane took care of me with my older children, she listened to me, helped me, laughed with me and she and her husband Steve introduced us to the famous Christmas tree hunts which will be a part of our history forever.....I remember her passion was children's literature and she suggested every wonderful book I read to my children.
And then I remember that one day, one really terrible day when her husband Steve passed away far too young, leaving children and a wife who missed him so terribly....I was confused and angry with this heavenly decision. The day he left us I stood outside their home and suddenly remembered Halloween. I don't know why I thought of Halloween right then, but Steve had been the guy who took our children trick or treating, he stole their candy and made fun of their costumes. As I stood on their sidewalk that day I thought that maybe, just maybe, if I conjured up a strong enough memory reality wouldn't get through. But despite all my efforts to wish it away I realized it was true. I then watched Jane show us how to deal with indescribable pain and grief with umbelievable graciousness.
Denise came into my life right after that through the beloved game of football. Right after we moved I didn't know anyone until I met this really nice woman. Her son, Bryce, played football with my son Mikey. And in all honesty, Denise may be the kindest woman I have ever met. Despite my evil influence she never said a cross word about anyone....wow....So where Jane left off, Denise picked up....a new pizza buddy, a new friend to watch games with...someone to remind me it was my time to bring treats. I never remembered the treats, but Denise always did.

These two incredible mothers will be a lasting influence in my life, a part of that fabric that makes up my family. Memories intertwined with pictures taken with my heart.
Posted by Donna Tagliaferri at 3:24 PM 8 comments: