In the Blink of an Eye Part 2

There are 36 hours missing from my life. I only remember one thing that occurred during that time, and it wasn't otherworldly at all. I asked my family to share their recollections with me so I could try and piece it all together. What I learned from them was hard to hear because I scared them so badly. Intellectually I know it wasn't my fault, but I felt responsible. Since then I have replaced that negative feeling with gratitude for a family that loves me so much.

When Karla got to our home Sunday night it was obvious to her something was very wrong and she told my husband to call 911. I was taken to the nearest hospital only 4 miles away. My daughter Ashleigh followed the ambulance with my son and husband following behind her. On the way, the Ambulance stopped and pulled over which frightened her terribly however it was only a brief stop to fix wires that had come undone. At 1am we arrived at the emergency room, now the doctor and his staff had to find out what was wrong. My blood pressure was 60 over 44 and Raymond remembers them giving me something to bolster that. I was intubated to help my breathing and sedated (thank goodness) Then the testing began. For each test given there was lag time while results came in, which is understandable but excruciating for families. Ashleigh noticed that my arms and legs were ice cold. The nurse explained my body was shutting down to protect the vital organs. And that protection gave the medical staff needed time to discern what was occurring.

The ER doctor at the first hospital did not stop until he figured out what was wrong. It was not until the cat scan did things start to come together when they found fluid in the pericardium (the sack around the heart). This was impeding my heart's ability to beat. The doctor told my husband I needed to get to Summerlin hospital immediately for surgery and if they couldn't find an ambulance they were prepared to use the helicopter. Everything changed to warp speed. An ambulance came available for the trip to Summerlin Hospital which is equipped for the kind of surgery I needed.

Ashleigh remembers the kindest nurse meeting her outside the ER and letting her break down...then showing her exactly where to meet everyone in the hospital. Raymond remembers the Emergency room doctor being unnecessarily rude and asking questions they had already answered. He was also the one who asked the most chilling question of the whole experience. With my husband on one side of the gurney and the doctor on the other he demanded to know what kind of insurance I had. No one had been able to find my card with all the information on it (note to all...keep your important information handy).

He said...."I have to know what kind of insurance she has so I know what doctor to give her."

This can be interpreted many ways, but my family took it to mean there was a hierarchy of doctors and without the proper insurance I was not going to get the best doctor or the best care. Tensions and emotions were very high and this was the only insensitive person my family came up against. Ashleigh immediately called my long time friend John Daly who is the national spokesman for my Healthshare program. He contacted the hospital and a representative came to the emergency room right away to say everything was in order and I could have any doctor. Since time was of the essence this was great relief to my family.

Next they met with the surgeon who painted a very ominous picture. Dr. Afifi told them without surgery I would die, with surgery I had a 50/50 chance to live. After the surgery I would still be critical as I could bleed out or have a stroke. He said it was the most complicated heart surgery there was including heart transplants.

Imagine what this was like for my family, they were working on no sleep, extreme worry and just meeting a surgeon who would be doing the most complicated surgery there was on a heart, my heart. So my daughter started calling people...we have lots of friends who are doctors and she was determined to find one who knew this surgeon. They needed comfort and any kind of reassurance. Her first call was Susan, she and her husband Bill are close friends and Bill is a surgeon. Susan was able to find out right away that Dr. Afifi was a good doctor who had performed this surgery many times. She was also able to help Ashleigh call our friends to let them know what was occurring. Raymond told me the minute Ashleigh got off the phone with Susan his phone rang with my friend Betsey on it. The troops were alerted! Every person who found out called someone. Ashleigh had been in constant contact with my son Trey and daughter-in-law Heidi who were in Italy on their long awaited honeymoon. My youngest daughter Emma was driving in from St. George with her husband. Within an hour people had gathered from everywhere to wait with my family. Several people brought food which was so kind since no one had eaten all night. My Stake President who was the Bishop while I was relief society president (I was the leader of the women in my ward and worked every day with Bishop Gardner for 4 years) came right away. He said he had his hands in someone's mouth (he is an orthodontist) when he found out and couldn't stay at work. He called his wife Lianne who told me she immediately gathered her family to pray for me. When they arrived at the hospital it was Lianne who convinced everyone I would be ok, giving my daughter hope. A positive attitude brings energy! Don't ever forget that. Raymond told me when Emma arrived at the hospital all three of my children just flew into each other's arms...they were there for each other.

My friends have always been my family and on this day they filled every need. In the waiting room Betsey sat on one side of Raymond and Stef sat on the other. Denise told me in her rush to get to the hospital all she could think of was stopping at Starbucks and getting Cranberry Bliss bars, she has no idea why. Mikey and Ashleigh finally collapsed and slept across the chairs. All of my friends have a role to play in my life, Denise, Betsey and Stef are always there...they love my children and have always been a part of our lives. Denise helps us celebrate everything, Stef keeps me spiritually grounded and Betsey makes sure we remember our cups are half full. She did her job well that morning keeping everyone as upbeat as possible. Surgery was 7 hours what a blessing it was to have so many people come through the waiting room. They brought hugs, encouraging words, and food.

When the surgeon came out after it was over he said things went well, they were able to repair the tear and he was very hopeful. But he let them know I was still critical and the next 24 hours were very important. But surgery was over! Denise said she still remembers the sound of my daughter's laughter....they were so relieved. 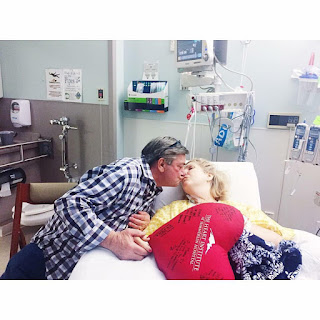 I didn't fully wake up until Tuesday afternoon. It was surreal to find out so much time had passed...and that so much had occurred. I am still processing the entire experience, still recuperating...still amazed at how incredible everyone has been to me.


Posted by Donna Tagliaferri at 11:21 AM