Is anyone as concerned as I am about the fact that Jennifer Lopez and Marc Anthony have a clothing collection at Kohl's? Isn't that awkward? What do divorce lawyers do about that?
Just wondering.
So I went to the Doctor this morning.....my appointment was at 7am. No problem I get up early, and besides I weigh less at 7am than any other time of the day. Don't laugh, you know you hate to get weighed too. Anyway, I check in at 7am.....the woman at the computer wasn't all the way checked in, but there I was, ready to get checked in and weighed...... right on time by the way.....please know there is not ANOTHER person in the waiting room. Obviously it hasn't gotten out that 7am is the finest time of the day to be weighed. Anyway, twenty minutes later the nurse came to get me from the waiting room where I was waiting....all alone.

Then off to the examining room, where I waited for another 40 minutes. I was deep into meditation at this point because I didn't want my blood pressure to go up.....deep meditation for 40 minutes. Total time waiting....60 minutes. Not to worry, I am kind of a zen patient. No problem....didn't even notice that I waited for 60 MINUTES when no one else was there. I left the doctors office with a fist full of orders for tests. A colonoscopy, a mamogram, a visit to a nutritionist, eat less salt, a flu shot and of course, take a multivitamin.
Couldn't love life more.
But here's the deal.....if I was way younger, which is what I used to be, I would leave it there. Kind of cranky about waiting so long. But you know what? I may have waited 60 MINUTES for the doctor when not another person in the world was there, but all I left with from the doctors office was normal stuff. And I am older now so I know that there is always a chance you can leave a doctor's office with really bad news.
And I didn't.
So even though I had to get weighed, and explain one more time that I DON'T have a family history. Not a family history of heart disease or diabetes or colon cancer ......I don't have a history.....period. So give me the freakin' test....give me every test you have. I will happily take the tests because right now I think all of those tests are going to come back just fine.....and I am grateful for that.
Speaking of being grateful....my little boy plays football for Southern Utah University (go T-Birds!) His team traveled to Las Vegas last Saturday to play UNLV.....and they kicked their butts! No one, and I mean no one, thought they would win. It was a beautiful thing.....the best part was after the game all the fans went over to where the buses were and just hung out for over an hour. UNLV's fans left during the middle of the third quarter so we had plenty of room. We just smiled at each other, a little goofy. The coaches were so happy. Not "I just won the lottery" happy, but "I studied so hard and made a 32 on my ACT" happy. It was the best win of their program, ever. The thing is these guys know they weren't the first choice of division 1 schools. There are lots of players from Las Vegas on SUU's team that UNLV didn't recruit. Not good enough. Looked right past them. That rejection stings.....which made victory all that much sweeter.
Sometimes being told you aren't good enough is just what you need.
So get out the butt-kickin' machine Taluleh, and get it done!!
Posted by Donna Tagliaferri at 7:20 PM 8 comments:

I am not a political operative, although I would love to be. I would be fabulous at that.....but alas, I am not...so I am giving my opinion and advice to President Obama completely free! This is an even better deal than the entire country of the United States which right now, is 50% off. (Except for Las Vegas which is an even better deal)
The Obama campaign has put forth a website called AttackWatch.com in an effort to combat inaccurate information about the president.
As a dopey middle aged woman I can help you save some time and money....this will not work.
President Obama this is not how you convince people what your message is. You just lead and let people figure out who you are. If your message is clear people will catch on.
As a Mormon I have the same problem President Obama has. People believe all kinds of things about me that aren't true. And the only way I can convince people they are believing falsehoods is to be me.
I have been asked why I can't eat Chocolate on Sunday. My husband has been asked how many wives he has (the idea of more wives like me gives him great pause). Generally folks have asked me whole host of things that I have just stared at them over.
But honestly the only one that bothers me is when folks think I don't believe in Christ And if someone really wants to believe that, there is nothing I can do to change their mind. Except be who I am.
So President Obama defending yourself will never work. Save your time, breath and money....just be who you are and let people figure you out on their own.
We are all our best definition of who we are. I hope there is enough evidence to convict me of being who I claim to be.
Posted by Donna Tagliaferri at 1:53 PM 14 comments:

Please read the blog post from a very talented writer and doctor......it was quite remarkable.
Much love, happy Monday....
Donna
http://lydiakang.blogspot.com/
Posted by Donna Tagliaferri at 8:23 AM 5 comments: 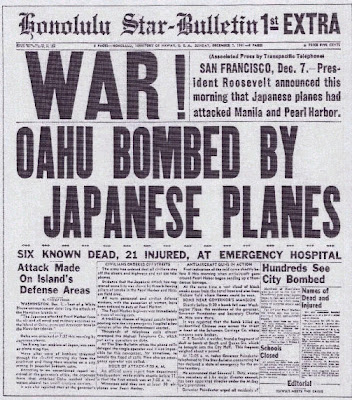 My parents were very young when Pearl Harbor was attacked by the Japanese, but my grandparents were very much aware of the enormity of what had occurred. Not one time when we discussed it (I loved to talk about these things....odd child that I was) not one time did they refer to it as a "tragedy". It was an act of war. Their lives were never be the same after that. My grandmother spoke of the shock of that attack, and how long it took her to simply understand something that evil could have happened. She spoke of "all those men who died". She was always sad when she talked about it. Of course she knew someone who knew someone whose brother had been killed, which made the whole event more real to her, more personal. And my grandmother never minced words about what had happened, it was senseless, it was evil, it was war. I thought about her this week as I watched another commemoration of 9/11. I thought about how she would have reacted to all of this. But then I knew what she would have said, it was senseless, it was evil, it was war.
Not a tragedy....war.

After the shock of 9/11 passed, I was heartened at the byproduct of this act of war. Our country came together, flags were everywhere....people went back to church....in droves. From an act of war had come what occurred after Pearl Harbor...unity. We were all Americans....all of us had been attacked....and we were all one. One nation under God, indivisible, standing for liberty and justice for all. 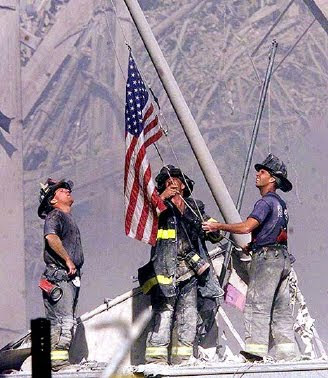 And then all of that went away....blame started. Recriminations, rancor, contention....whether you believe satan exists or not you have to agree all of his attributes have been on parade. We brought all the worst behavior people can have right out on the porch for all the world to see. People who claim to love America clearly were hating Americans (I stole that from a movie - thank you Aaron Sorkin). And today regular Americans are giving up. A school in Brookline Massachusetts wants to ban the pledge of allegiance.
What?
The ten commandments have been banned from the outside of federal buildings...that is funny to me. Ignore the ten commandments? Can you imagine what our lives would be like if people simply obeyed the ten commandments? Let your mind wander there for a minute. We could all go back to being farmers, musicians and artists because 99 per cent of the occupations in the world would be rendered obsolete.

Last night the President said that government should partner with business to make things better. With all due respect Mr. President....no sir that is not how to make America prosperous again, the last thing I want to do is partner up with some of the ne'er-do-wells in Washington. All they know how to do is regulate and tax, point fingers and blame. No thank you.

I can't really decide what I am politically, so I am not throwing stones at any one individual, or group. (Except for anyone who talks over people, personal peeve...I hate it and I will give money to your opponent every time.) Both parties are guilty of hating Americans, and America is my homeboy. From the Urban dictionary a homeboy is a close friend. Originally used among transplanted African-Americans with Southern roots to refer to and aid in the assimilation of someone who might have directly migrated from a common Southern home town or is otherwise well known to the person using the term.

Wow....bet you hadn't heard that definition.

I keep wondering when America is going to come back....When we will finally have enough of this. Because right now we are just standing on the sidelines wringing our hands....we aren't acting, we are being acted upon, and sorry but that's crap.
I am looking for a leader.... 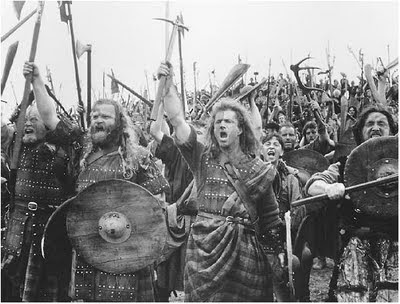 I think we are all looking for William Wallace...and I am not going to stop until I find him, or her. When you vote next time ask yourself if the candidate loves America as much as William Wallace loved Scotland....as much as George Washington, Patrick Henry or Thomas Jefferson loved America. Ask yourself about eighteen year old boys who fight and die for the love of their country....who measures up?

And then go vote....
Find someone who loves America. And if you decide not to vote, don't ever sit next to me. I am not as nice as I used to be....another movie line theft.
As Todd Beamer from flight 93 said.......Let's Roll.
Posted by Donna Tagliaferri at 7:40 PM 9 comments: