Mother nature is a mad scientist! 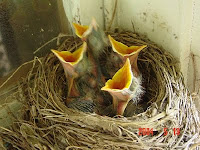 On either side of my front door are two quite fabulous ficus trees. In one of the trees a mother Starling decided (again) to build a nest.
Things were moving along just fine.
Nest built and eggs were layed....A suitable amount of time passed.....and the birds were hatched!...Yeah mother nature!!
As homeowners, our responsibility was to ignore the nest along with the mother bird's very bad manners. She considered anyone who came to the front door an intruder. And they were treated as such. Knock on my door and a half pound of mother bird fury with a kind of jack in the box effect would come shooting out of the tree. This sudden motion would certainly catch your attention.......more than one person screamed.
Startled by a Starling.....
So we all gave her a wide berth and graciously respected her brief encampment. I mean how long could this whole process take? With a nod toward fragility, Mother Nature can claim an absolute triumph in how quickly the system works. Stop watch in hand from egg to flying is about a month. So as long as the mother tolerated us, the eggs by the door was an interesting conversation point. If a frightened guest was even in a mood to hear the story.
But then one more wind storm and you guessed it, the tree fell over. That scary-baby-cradle rhyme came to mind. "When the wind blows the cradle will fall and down will come baby, cradle and all." Doesn't that rhyme trouble you?.....When you listen carefully you find out some psychotic mother has not only put her baby in a tree, but the tree top. Isn't that odd? At least this mother bird fastened down her nest, and bird nests, unlike babies actually belong in trees. However her due diligence didn't spread far enough to notice the tree was not actually in the ground but instead in a rather fabulous container on either side of a red door.
That's right my front door is red...
So now what? I put the baby birds back in the nest as per the bird people's advice. They assured me it was an old wives tale that mother birds won't come back. So I put the nest back in the tree..along with the love starved and worm deprived baby birds. (As an aside, mother birds need to get a little better choosing the components for their nest building. Poop as mortar is disgusting, and would never pass code.)
I have tried feeding them, because I can't just stand idly by while "nature takes its course". However, I am highly annoyed that the mother didn't come back. She did not finish her game. And I am left with 5 baby starlings. The mother bird and I had an implied contract that I would leave her alone and encourage my visitors to duck as she flew at them... and she would use my tree to add five more starlings to the world's population.
I fulfilled my portion of the contract, she did not. Her portion of the contract is now null and void and I get to take back ownership of the tree. Only I don't want the birds.
So please, can someone come and get them? There must be a Mother Theresa of baby birds out there. My approach is mostly Elmer Fudd on this one.....help!
Posted by Donna Tagliaferri at 9:29 AM 8 comments: Links to this post