Stevie Nicks and Me 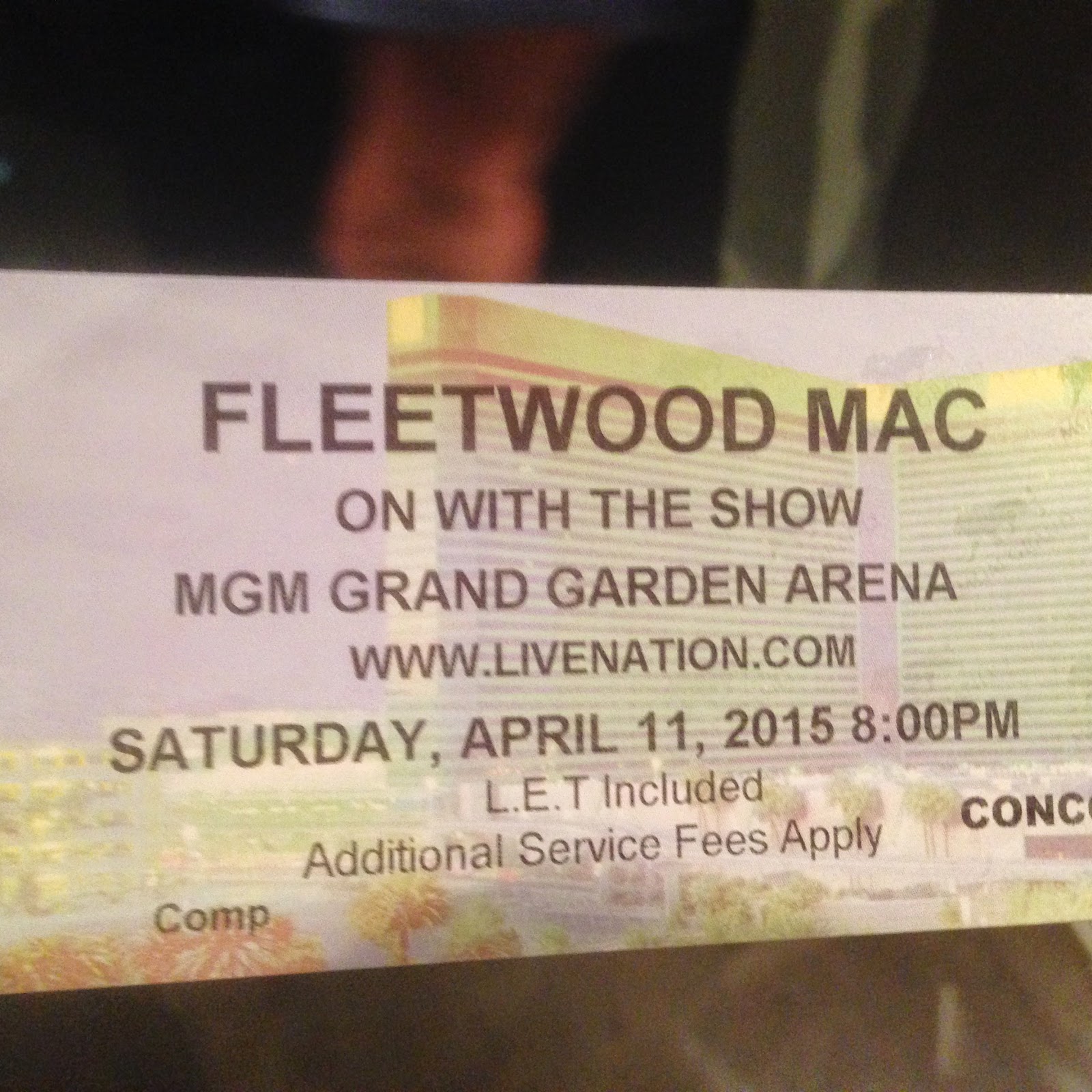 The best part about life is when something totally amazing and unexpected happens.  A few months ago a friend from Facebook contacted me with this delicious news.
"I didn't realize you were such a fan of Stevie Nicks, my boyfriend is Mick Fleetwood's body guard and I will make sure to get you tickets for their next concert..."


I relived every one of those emotions last night. 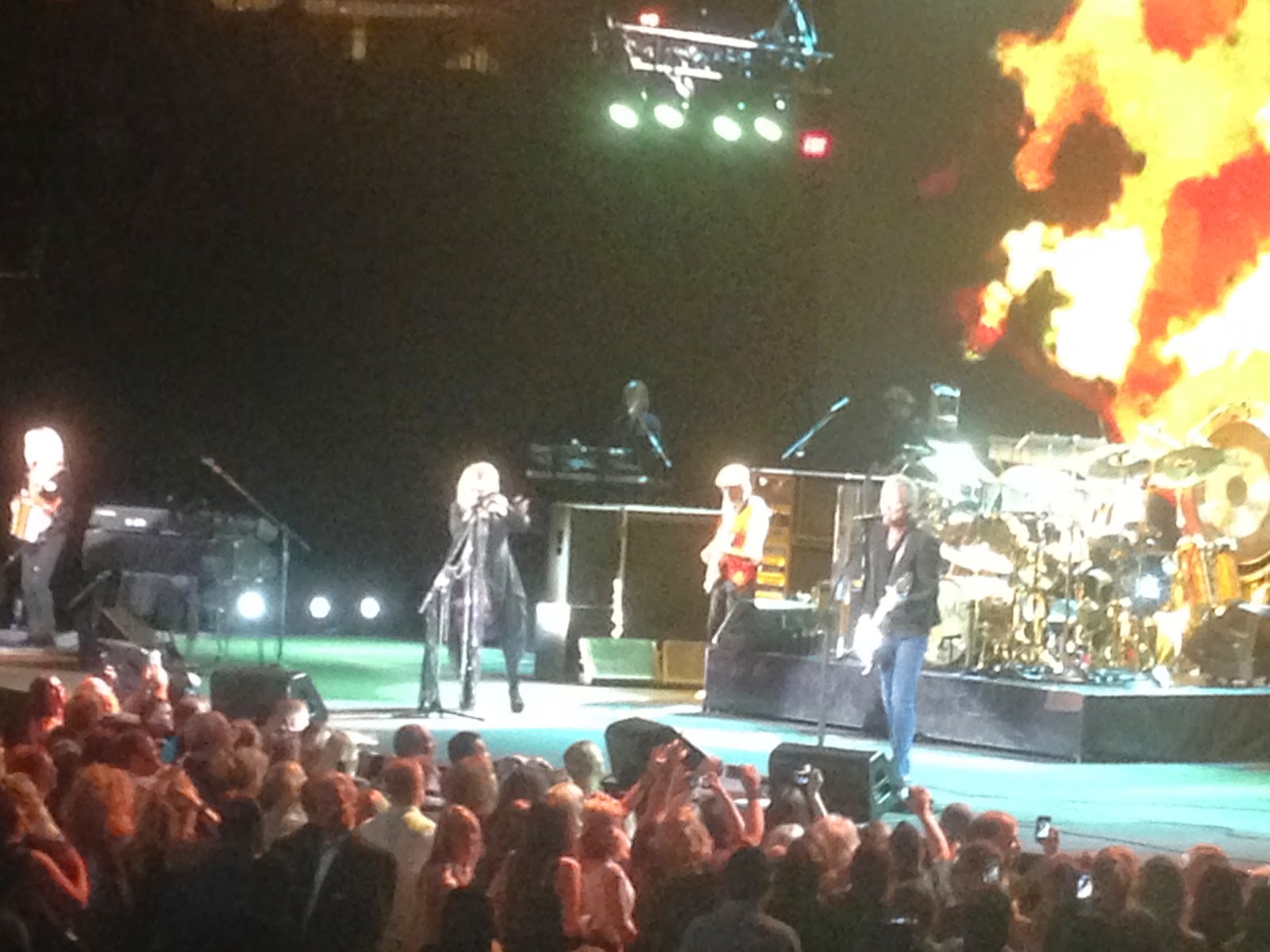 The pictures are terrible...but I know what they are.  Just reminders of great memories... 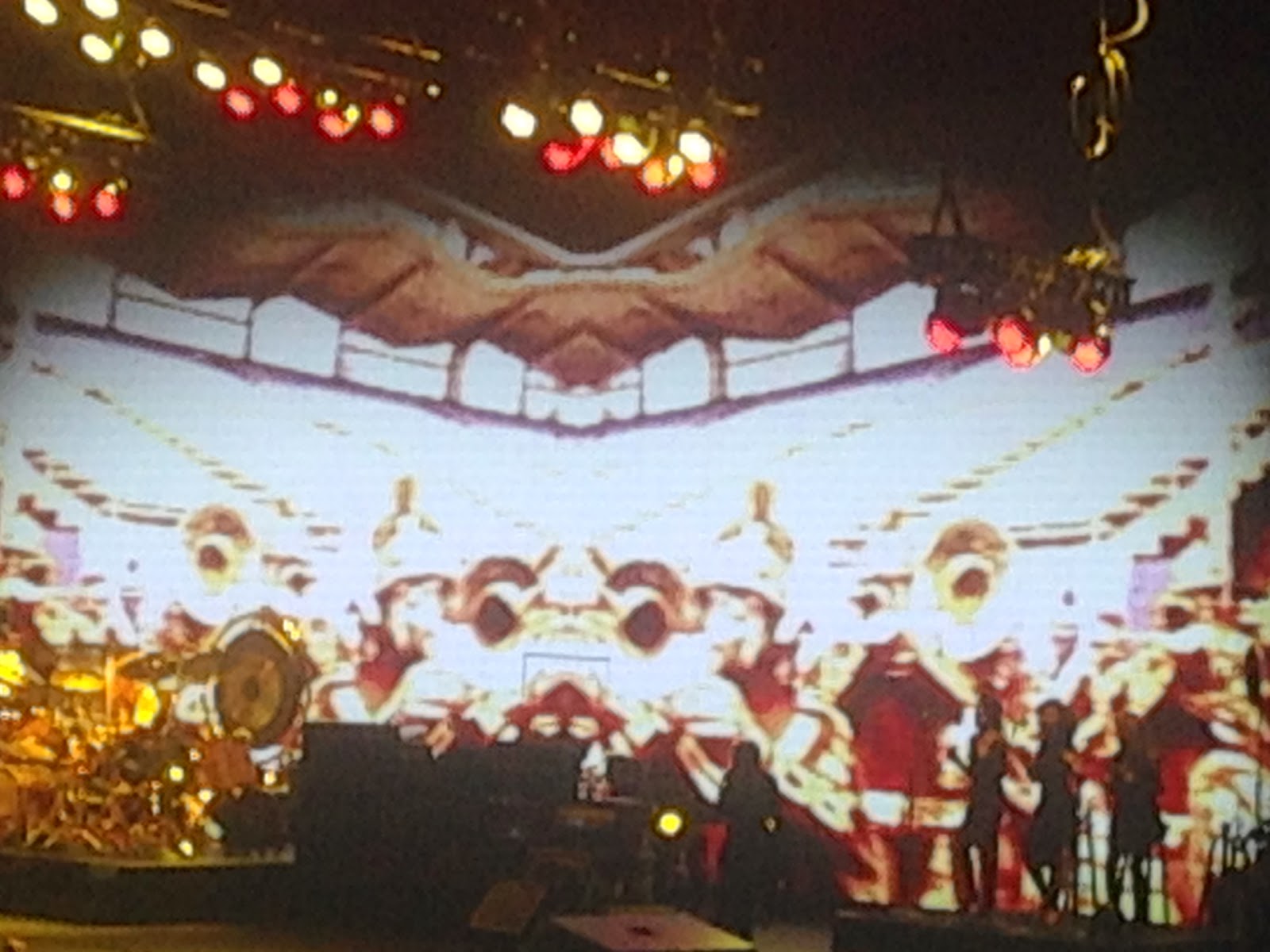 When they sang "Tusk" I went back to that beautiful day when my daughter graduated from USC and we all stood on our chairs as the Trojan band played Tusk...it was one of the happiest days of my life, at one of the best Universities listening to one of the best bands college has to offer.  If you don't already know Fleetwood Mac recorded the song with the Trojan Band...so USC plays it at every single football game (with the added yell at the end "UCLA sucks"....sorry Bruins, it's just part of the reverie) 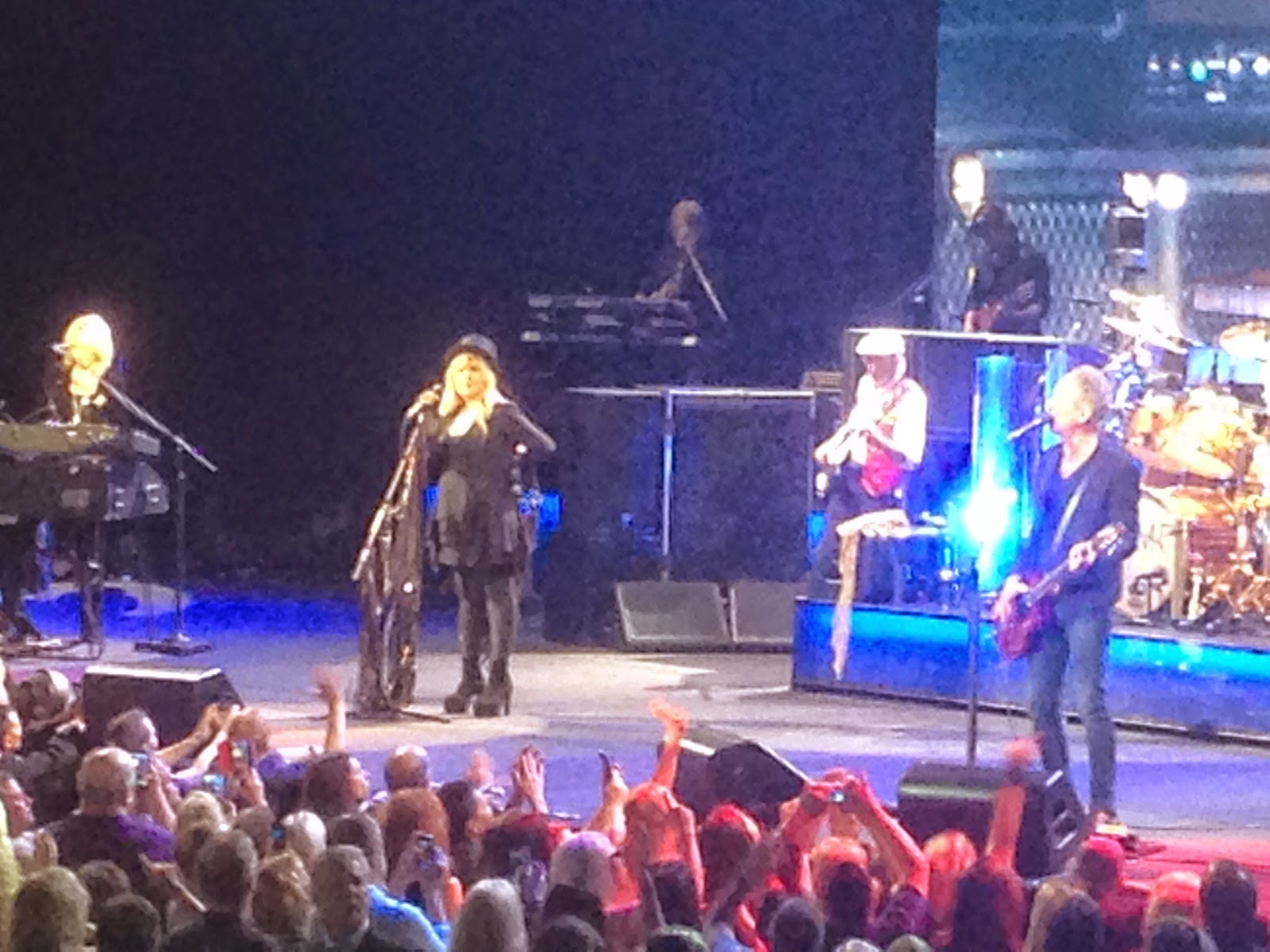 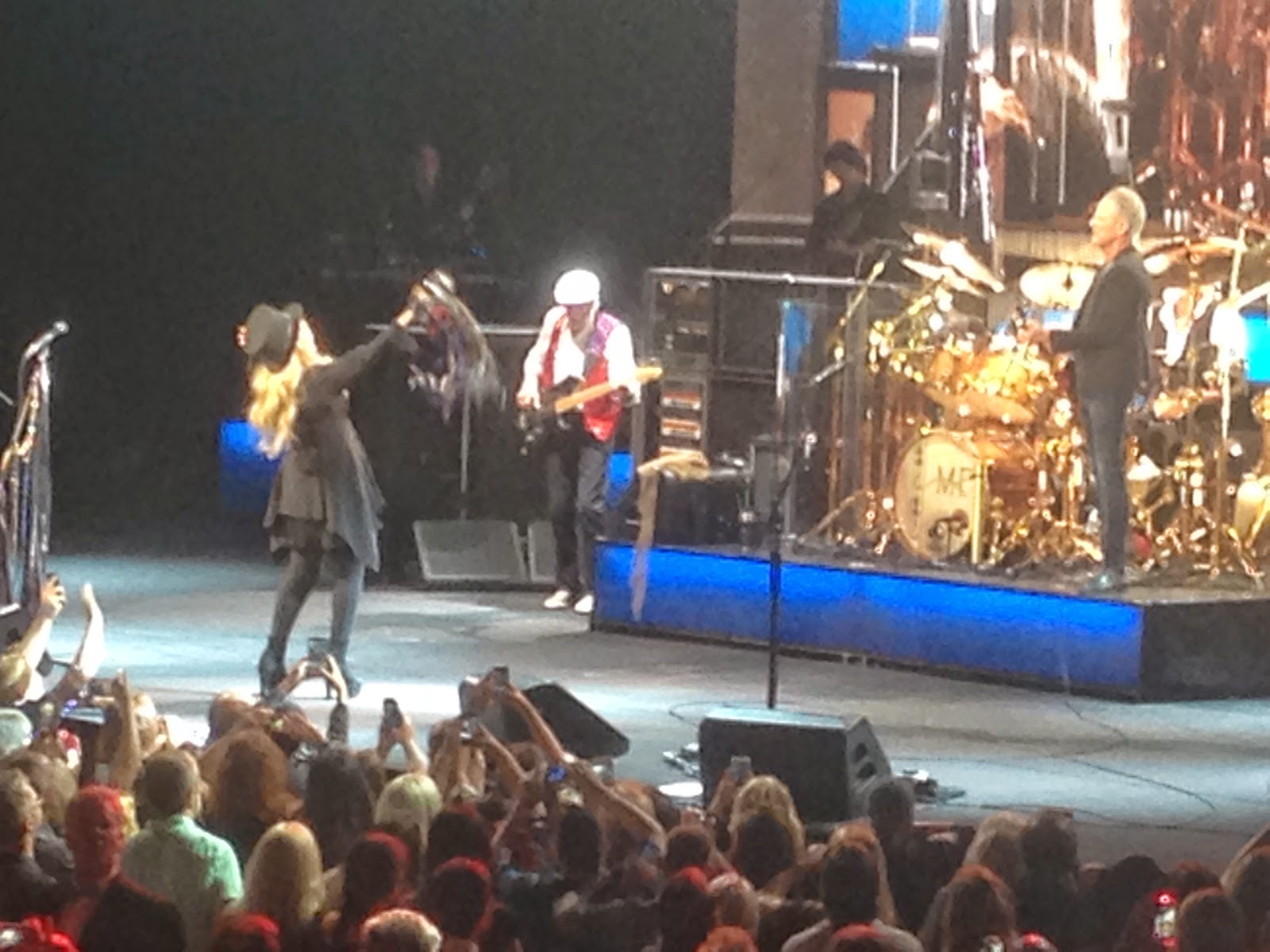 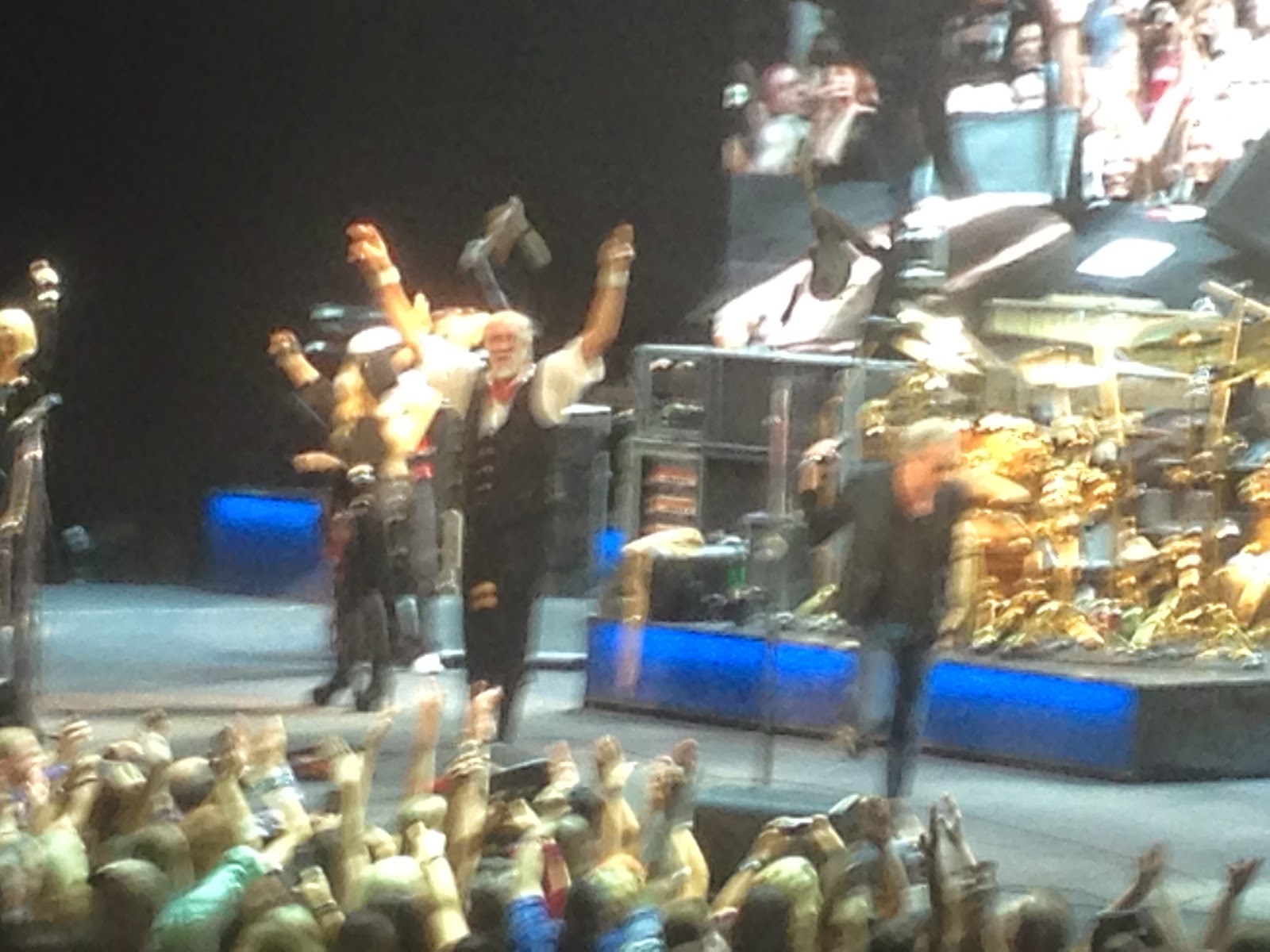 Mick Fleetwood had the best time.  It's true we were an incredible sold out,audience.  But he was so happy.  So glad to be there.  And so amazing on the drums... 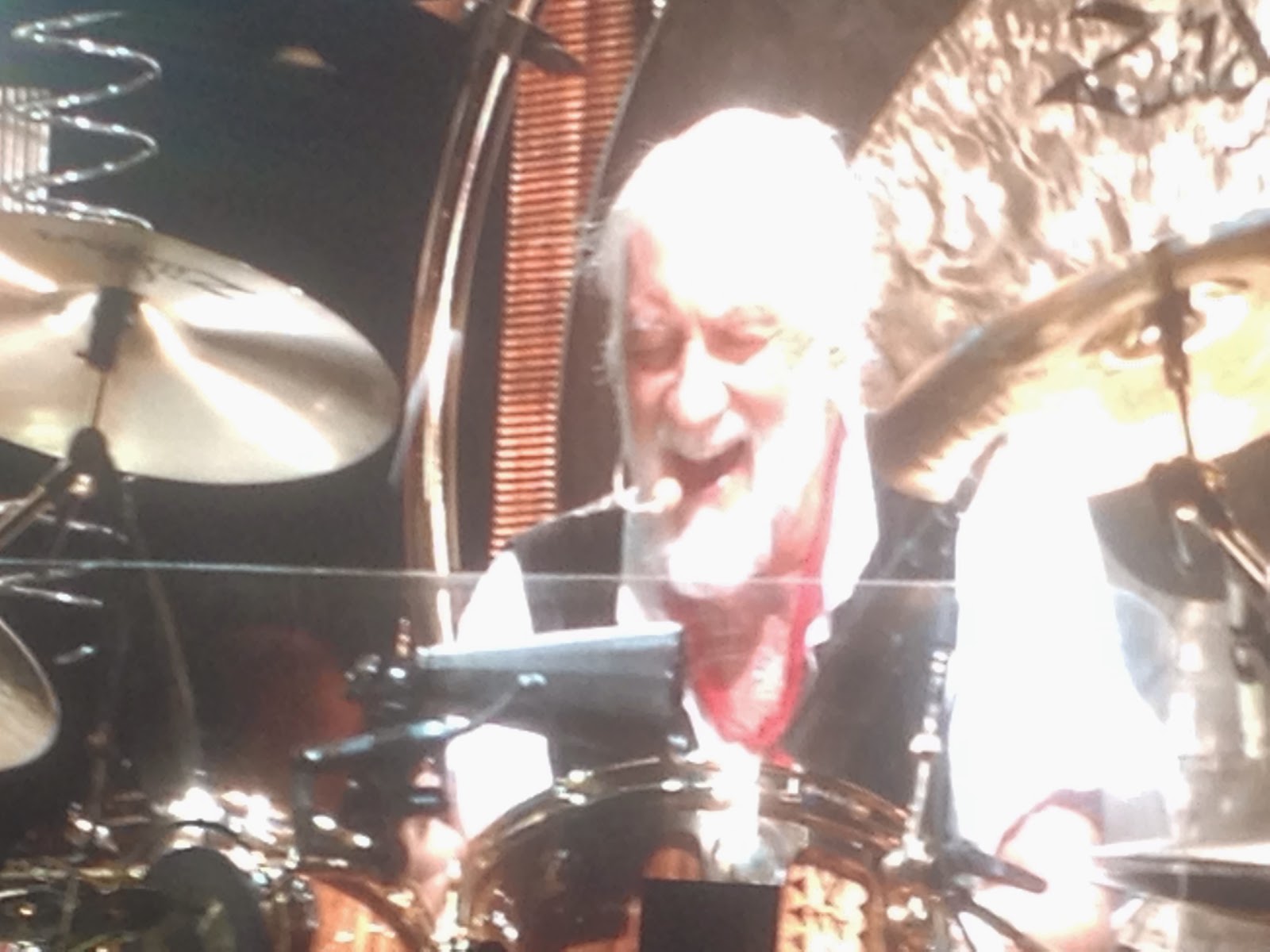 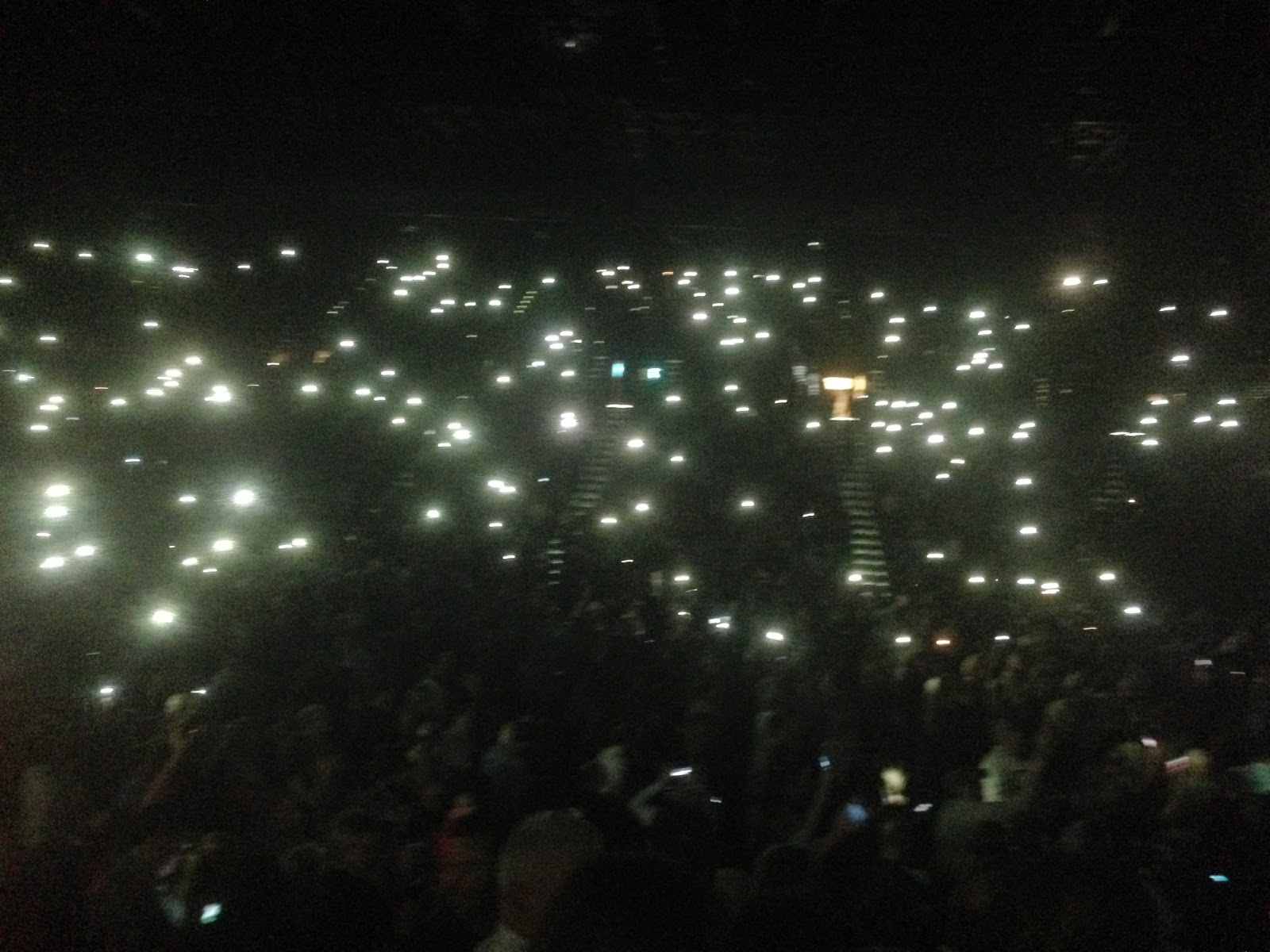 They came back out 2 times...each time Stevie
Nicks told a story from their past.  They are open about the problems they have had, the drug abuse, divorces and just being dysfunctional. But they have come out the other end, and that is what they are all the happiest about. 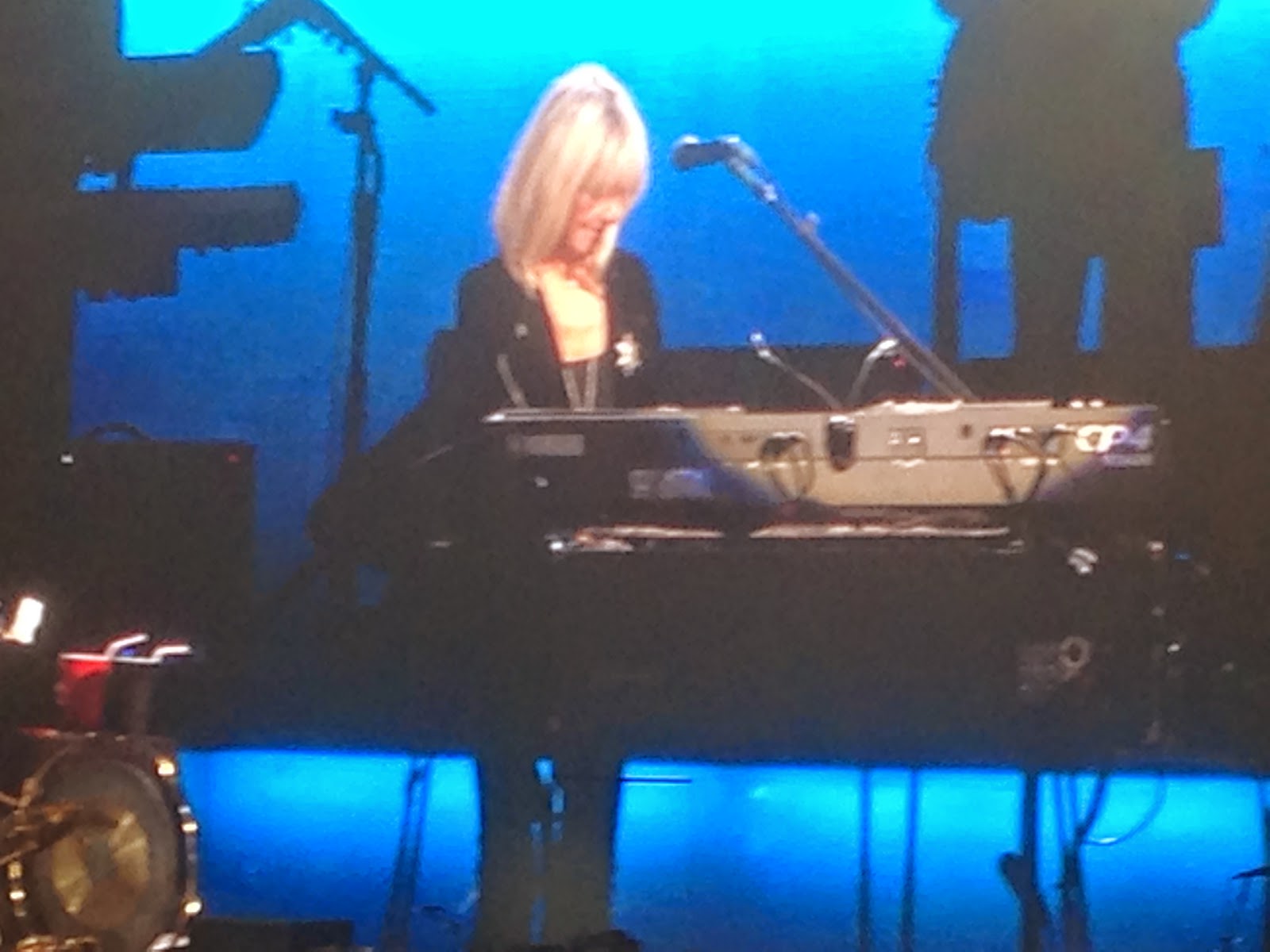 Christine McVie is back after 16 years...I thought she sounded great.  Stevie said the first thing she told McVie when finding out she wanted to come back to the band was, "find a trainer"

In one of the stories Stevie told she said, "Don't ever give up, don't stop dreaming or believing in yourself."  It sounded like she had learned that the hard way.  Funny how we think some people have it all, when in fact they are struggling with things just like the rest of us.

But they do have the rockstar thing down cold.
Posted by Donna Tagliaferri at 9:04 PM 1 comment:

What is your mission?

"When you live your mission through your business brand, mission statement and vision, then amazing phenomenal things start to happen.  Your perfect dream clients are drawn to you.  People get really excited about what you are doing.  They spread the word to their friends, they sign up for your services, they give you great testimonials.  You get more customers, make more revenue, and your business grows with ease.  And best of all - your team is more creative and having more fun than ever before because everyone is in absolute alignment with your Why."

I don't know who to credit this beautiful statement to.  A friend's wife put it together from some things she had read....so I can at least credit her with recognizing the worth of this.

Notice how positive it is....there isn't a bit of wishful thinking in it.

Right now, sit down and write down what your mission is.  And after you do put it next to your computer, or your bed...tape it to your mirror.  Put it in your phone.  Find reasons to make it happen.  And when reasons occur for you to give up....counter them!  I think so many things were just that close....that close, and then we stop.  Right before we get there...right before incredible were going to happen.

We live so beneath our privileges...we listen to the voices who tell us we cannot do it.  Don't try, stay safe....

Nothing great has ever occurred staying safe.  Walk out on the edge and fly!
Posted by Donna Tagliaferri at 8:04 PM 12 comments:

My Thoughts For This Holy Week 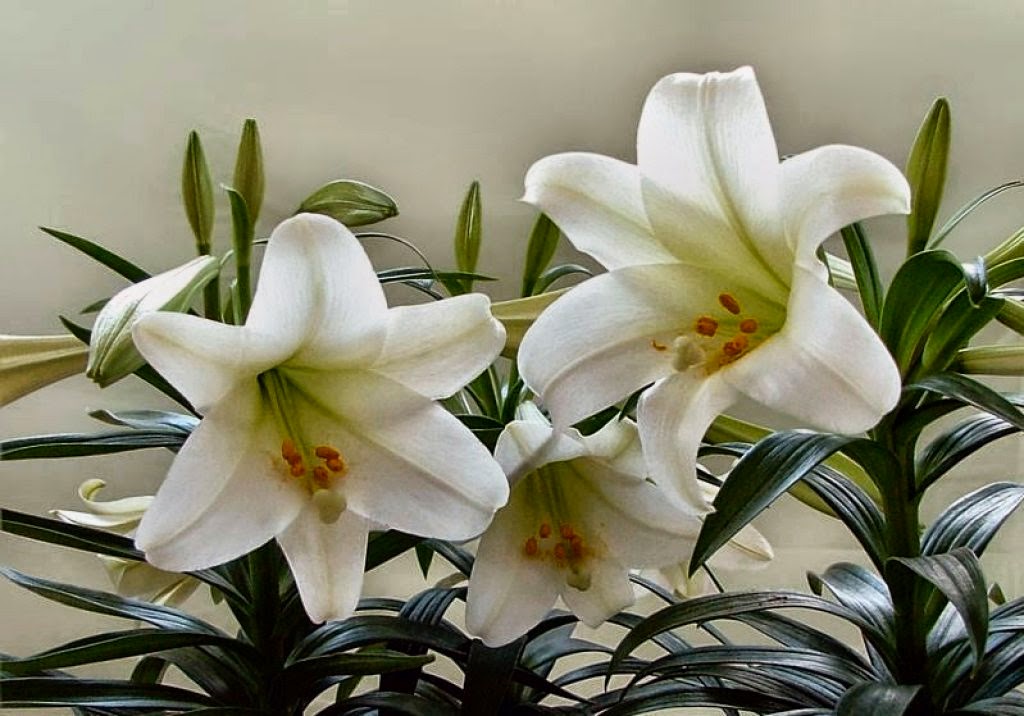 When my life story has been written, and I hope it is when I am very old so I can soften the edges of my personal emergencies, yesterday will go down as one of my most memorable.  To say so much is occurring at one time would be an understatement.  In the middle of a very shallow breathing episode and tremendous anxiety, I began a fast.  I wanted my world to calm down so I could gain perspective and find some direction.  When I am in full "run for your life" panic I cannot see solutions.  It is only when I find a way to be calm, that solutions come.  Not easy, but completely necessary.  I don't have to find peace yet, just give myself a chance to find peace.

I understand that it is good for the soul to stretch, but when you feel as though there is no room left to stretch then joy disappears.  I try to think of life without problems, because avoidance feels better, but life will never be without problems.  We can find peace in the storm.  This is a very hard concept for me, because it takes a great deal of effort.  Having a fit and crying is easy and takes no effort at all.  You don't need control, you don't need to think, or care about anyone around you...just let it explode.  But you learn nothing, no solutions come because there is no truth inside a tantrum.

I realize we all have different beliefs and most everyone goes through the same process.  We search for something to believe in, try a few beliefs on for size, wear them for awhile, and see if they fit.  If we like them then, hey, we go from there.  If not we return them to the belief counter and continue looking.  I follow the teachings of Jesus Christ because they are so simple.  Love one another, be peaceful, forgiving and grateful.  I keep a picture next to my computer of the Savior standing in a ship surrounded by frightened men in a terrible storm.  The story is the wind and waves are pounding and He is asleep.  The men on the ship wake him scared to death asking him, "do you not care if we perish?" The Savior stands, puts His hands up and the waves and wind subside.  He could sleep because He knew everything would be ok.  I have much more in common with the men on the ship than I do in believing the Savior will calm the storm.  Being frantic is more my style than finding serenity.  Sometimes I want to just sit by the side of the road and let the wolves eat me, but that is not what the Savior wants.  He wants to save us, pick us up, pull us up if need be all to save us in a storm.  There is a scripture that is widely misinterpreted, "After all we can do, we are saved by Grace alone" It's the "after all we can do" that throws people.  They feel that they must somehow earn favor, when all we have to do is follow the Savior.  And that means, Love each other, Be grateful, Be forgiving and Be peaceful.  Religions and beliefs have these things in common because they work.

It's not easy to find peace in a storm, but it's possible, and then we can sleep though any storm.
Posted by Donna Tagliaferri at 5:06 PM 3 comments: