One day at least 15 years ago my friend Ann McMullin told me I needed to read a column from a Salt Lake City Newspaper by a woman named Ann Cannon.(Yes Virginia we used to print out the internet every morning, roll it up with rubber bands and hand it to young children who peddled off on their bicycles and delivered it to folks in their homes to read) I loved her column. I laughed, cried and pondered her words as she wrote about her children and husband, her mother, TRQ - the rodeo queen, her dad the football coach, her dogs, baseball, her faith and life itself. Her funny and often poignant stories inspired me to write. The little bit I was writing had been silenced by the voices in my head that whispered to me I couldn't write. I allowed those words to keep me from writing for years. When blogging became a thing I stuck my toe in the world of words and wrote with total abandon not knowing where it would take me or caring if I was even good.

Then one day I wrote to her telling her how much I loved her writing and what an inspiration she was for me to write again.

And she wrote back!

So I wrote to her again

And she wrote back!

We wrote to each other for years with my family referring to Ann as my "cyber friend". I did what I do when I don't like what someone has said to me...I ignore them. Ann told me I could write and nothing meant more to me. When I would tell her it was too late in my life to write, she assured me it wasn't, so because of her I kept writing.

I cannot tell you how important Ann has been to me in other ways as we wrote to each other during some of the most difficult times of my life. I will never forget how kind she was as I grappled with depression, anxiety and fear. She rejoiced with me as I began to find the other side of it all and would  just keep encouraging me to write.

Then she accepted my invitation to fly here and speak to my woman's group. When I picked her up from the airport I felt like we had known each other forever. We were not just cyber friends but had the best story to tell!

I am excited to tell you Ann will be the special guest at our 2nd annual "Fall Into the Holidays" so I asked her to write a little about herself.

I will turn it over to Ann so you can see for yourself how much fun we are going to have on the 29th of September! 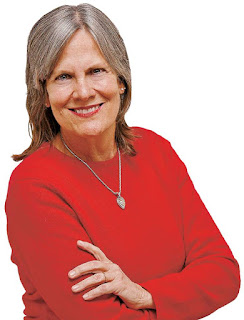 Hi! My name is Ann Cannon and I am eager to meet you all on September 29th at Ray Ray's awesome "Fall Into the Holidays" event.

Maybe I should introduce myself first. Donna suggested I share some interesting facts about myself, so here goes.

I know I am exactly like Forest Gump that way!

Meanwhile I've published a book called "I'll Tell You What" which is a collection of columns I've written over the years for the Salt Lake Tribune. There are also some original pieces about my father, LaVell Edwards, long-time head coach of BYU's football team.

Because I think it is so important to capture our life experiences in writing I'll be conducting a workshop that will give you an opportunity to write down a few holiday memories of your own.

I am looking forward to meeting you all and hearing your stories!

For more information about Ann, check our her website at www.aecannon.com