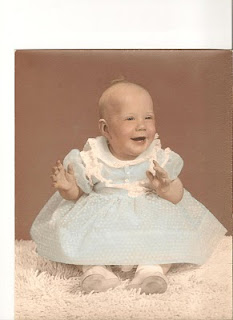 Before my son left for Costa Rica on a two year mission for our church, he sent a hymn book to me. I loved it...and I loved it more when I saw that he had engraved "Patti Jones" on the cover. I could not stop laughing, you see "Patti Jones" is the name given to me by my biological mother, Opal Leigh Jones. I loved having that little book, and then I lost it. The worst part was figuring out how to get it back....My name is Donna, everyone knows me as Donna but the hymn book said Patti Jones. So I assumed it was lost....no trail back to me. And then against all possible odds, a friend of mine ran across it in a pile of books at church. She was one of the few people who knew the story of Opal Leigh and Patti Jones. When she handed it to me I told her the timing was perfect, my birthday is Thursday and that is the only day out of the year that I am pretty sure Opal Leigh thinks about me. How could she not? The experience of labor makes a pretty deep memory for a mother, so I am confident we share a few thoughts on September 2.
I have always been OK with being adopted, my step mother, Jerry, told me in third grade(my father had been married before and he and his first wife Madeline adopted me, they divorced when I was four and she passed away when I was eight). I just kind of mentally added it to the list of things about me, good swimmer, blond hair, loves the beach...adopted. And that was the last time it was really mentioned. My dad never talked to me about being adopted, not one time, not in our whole life together....when you don't grow up in the world of Oprah you don't necessarily feel the need to discuss every private thing...or any thing. So in case I was wrong and it wasn't just another bit of information, I mean if in fact I was now "different" I didn't have to deal with it. Because my being adopted was disclosed and then closed.

Every once in a while a friend of our family would talk to my step mother about my biological parents. She knew them both...I guess pretty well. My biological father was a professional golfer, Opal was sixteen.......it is easy to figure out what happened. And not much additional information was forthcoming, except there was one story repeated a lot, it seems that after I was born she asked for a mirror........I thought.....perfect, vanity is genetic!

I went through a phase where I read a lot about being adopted. Stories of mothers finding children and children finding mothers. But finding my biological mother had never appealed to me. I would feel like I was intruding on Opal's life......suddenly showing up. Although meeting my mother would be interesting I don't know where it would go beyond that. And then we would be in some sort of "have to" relationship. And that feels awkward.

I am grateful to Opal Leigh for giving birth to me, and just because she did, I know so much about her. I know she was able to do a hard thing at a very young age. What must it have been like to go through an unwanted, and certainly unexpected pregnancy. I also know she found a couple to raise me......and then she let me go to have that life. All of my parents were flawed, just like me...and they did the best they could with the light and knowledge they had at the time. Just like me...and just like my children. I forgive my parents whatever they did to cause a bit of extra baggage in my life because I want my children to forgive me. That's how life works, we forgive when we realize folks are human and they in turn forgive us.

It has been OK with me to be adopted....I don't think I was misplaced or some kind of mistake. I went exactly where I was supposed to go. I don't think God scratches his head and says, "one, two, three, four, ....wait where's the fifth one? I know that child was here somewhere." God knew where he placed me.....the place I would fit the best and benefit the most. Maybe that is why I am fine with it. I know who I am. I know whose daughter I really am.

I accept that my entry into the world wasn't a typical one, and I know some folks are unsettled by their adoptions, I hope they find their answers. The truth that settled on me is that life isn't random and there is purpose in life. I attended a seminar once where the woman spoke of a cross stitch she was doing. From the top it all looked beautiful, stitches in place, colors perfect, and a tangible picture, but from underneath there were knots, misplaced threads, and certainly no distinguishable picture. we see ourselves in the cross stitch from underneath...dropped stitches and knots, we don't understand why things happen the way they do sometimes, but God sees us from the top of the cross stitch...a beautiful, perfect picture.

So tomorrow Opal Leigh and I will share a few laughs from wherever she is to where I am.....it's our birthday!


Posted by Donna Tagliaferri at 9:18 PM 8 comments: Links to this post