Murder, Moms and The Book of Mormon Musical...

I am so tired of hearing about the mother in Florida who may or may not have murdered her daughter. I try to avoid it, but because I am interested in the weather, politics and world events I still listen to the news. But it seems this is the way the news works....the temperature in New York according to the Casey Anthony trial is......we can report from the Casey Anthony trial that the Prime minister of Italy is having his problems these days. The stock market brought to you by the Casey Anthony trial, the Republican debates....a break through in medicine....incredible rescues....things so important seem to pale in comparison to a story I don't want to believe even occurred.
I kept all this to myself until I read a blog this morning called Kazzy's Pondering's. In her blog she wrote about how she ran outside, as though she was on fire, to take pictures of hot air balloons as they floated by. And all because she wanted to send the pictures to her missionary in Mexico...because it was a reminder of home. And she wanted him to feel some love from home.
That's the mom I want you to think about. The mom who loves with a fierceness that a tiger would step aside for.
I admit that some of that fierceness came out the other night as I was watching the Tony's...I usually watch the Tony's, but this year I watched with a bit of trepidation. I knew the musical, "The Book of Mormon" was going to win a lot. Out of curiosity I had listened to some of the score on NPR. Some of the songs were so profane I simply clicked it off. But some of the songs were filled with so much mockery and disdain about Mormon missionaries that I found myself feeling that fierceness only reserved for tigers.
Through my blog I have met people from India to North Carolina, from Utah to Mexico, and beyond. My new friends are divergent and because of our differences, so interesting. I have no desire to converse with people who only think as I do. I love finding out how my Hindu friends are coping with life, and my friends in New England, and Indonesia, and Texas, and North Carolina....I have not spoken about my religion much because I live by the adage, "Preach the Gospel every day, and if you have to use words." I think we are our best example...walk the walk of whatever you believe in, that is the best way to show others who you really are.

But since this blog is all about words....I have a few words, a few carefully chosen words, to say about the Book of Mormon musical. However understand that anything I say pales in comparison next to the official statement from the Church of Jesus Christ of Latter-Day Saints....

"The production may attempt to entertain audiences for an evening, but the Book of Mormon as a volume of scripture will change people's lives forever by bringing them closer to Christ."

Succinct and to the point...no contention, a completely guileless reaction to a play that sets out to mock a religion, a culture and a people.

These are my thoughts and I take full responsibility for them.

Every play that is nominated presents a song or a part of a scene for the television audience to get a flavor of their whole production. The song the Book of Mormon musical chose to perform was about faith...this Missionary from Salt Lake City was seeing horrible things, but he stilled believed. Because that is what Mormons do..they believe. I am sure I am taking this benign view out of context, but I won't take issue with that. I do believe. And even though the audience snickered when this naive young man believed no matter what I thought, it's true.....I do believe.

This play was not just about Mormons, it was about all people who believe. Don't miss that point. 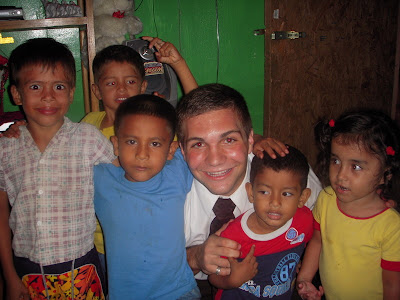 I want you to see what real Mormon missionaries look like....and they have moms like me. 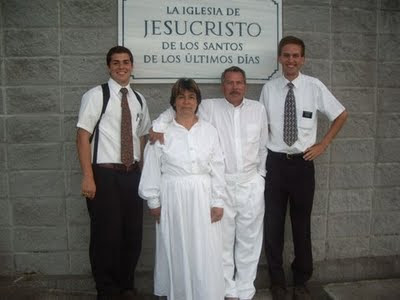 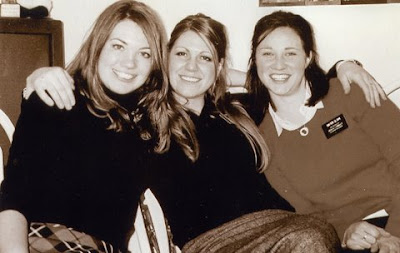 This is my beautiful daughter in the middle...a real missionary who believes...

A dear friend of mine came over right before my son was leaving for Costa Rica for two years...he looked at me and just shook his head. He supported what we were doing, but didn't understand it. He said to me, "I understand when parents send away their kids when they are difficult, I don't understand sending away the good ones."

My husband and I did indeed send away some good ones...but they came back better ones. They lived with a different culture for two years. They understand a language and a people completely. They found out what they could do when they only had the Lord to depend on.
This experience has been priceless. My sons were 19 years old..they left college, a job, friends and their family to serve others...all because they believed. And so did my daughter.

I hope some people will be curious after they see the play. I hope they ask questions...we may not be as catchy and flashy as the play...but we'll do.
And if you see a missionary this summer give them a cold drink or a hot dog. They are far from home and would be so grateful for a little love.
There is a professor at Harvard Business School named Clayton Christensen who wrote the most amazing essay about Why he believes...I highly recommend it. You can find it here...
http://www.claytonchristensen.com/pdf/Why_I_Belong_and_Why_I_Believe.pdf
Posted by Donna Tagliaferri at 6:33 AM 36 comments: Links to this post