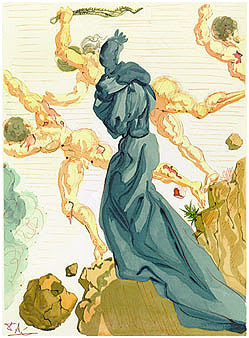 The name of this painting is "Hard Margins". The artist is Salvador Dali.... This painting is the reason I have no problem with politicians changing their mind on anything.
I am a flip-flopper on art.
Although I still marvel at the physical details, and I see beauty in this painting, I don't know if I would buy it today. My husband and I bought 6 Dali's the year we were married. We considered ourselves future art collectors, and it was cool to like Dali's....and if you like a head with it's brains falling out, being pulled through the ground covered by ants, then you will like it too. We were only going to buy 3 but the art dealer kept telling us Dali was going to die soon and that our pictures would be worth, "so much more." I think Dali was conveniently on his death bed for ten years. Death is a strong selling point for art dealers.
Anyway about the paintings, in the early 1950's Dali was commissioned by the Italian government to create illustrations of the text of Dante's "Divine Comedy" in honor of poet's birth. As you can imagine Italians did not like having a Spanish artist illustrating what is considered the most respected and greatest epic poem in their nations history. And to make it worse have you seen Dali? He is as unusual as his paintings.

When the project was eventually dropped by the Italian government (grazie) Dali took what he had already created to a friend and art publisher the very French Joseph Foret. Dali finished the collection over the next nine years and they were published in six volumes between 1960 and 1964. The collection included 101 watercolors...from what are some of the most beautiful combinations of colors and shapes to some of the most unusual things I have ever seen.
The images are in three categories, Hell, Purgatory and Paradise. We, of course, have 2 from Hell, and 2 from Purgatory. I hope it didn't say anything about our new marriage that we didn't choose one from Paradise. 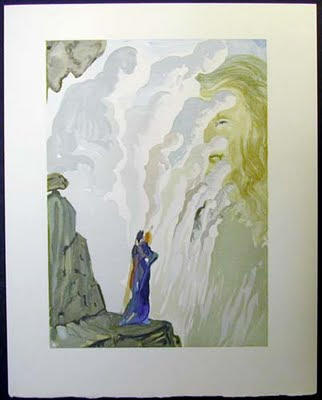 This one is called Ecstatic Visions, if you look at it long enough you will have visions for sure. Because I hate edges and heights, I always worry they will jump. So far so good. 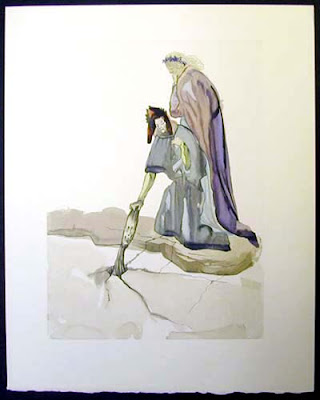 This one is called "Betrayers to their Homeland"
or "Traitors of Monteperti". Personally I like the Traitor title. Sounds more dramatic, nothing is more dramatic than having a head pulled through a crack...... 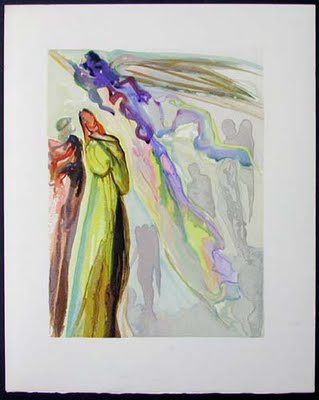 Apparition of the Ancestor......My favorite, I love the colors, it doesn't matter that I have the art appreciation of a Philistine. What matters is that I like shiny objects and pretty colors. Most people don't know much about art or how would you explain the dogs playing poker pictures? We get to like what we like....and if our tastes change, well so be it. So if your taste are the old masters, or flowers, or sailboats....Thomas Kincaid or Grandma Moses...you get to like what you like. To be a patron of the arts doesn't take a degree, or even a lot of money...just a little bit of interest.
So.....What art do you like?

Posted by Donna Tagliaferri at 8:06 AM 12 comments: