Norman Borlaug's Birthday...most famous man you have never heard of.... 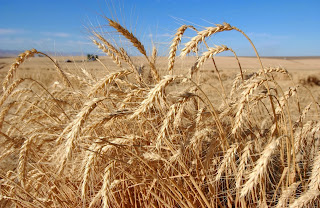 I have lived a good amount of time, enough time to see a few things that were predicted come to pass and a great many things predicted that did not come to pass.  In my teenage years I was told the oceans were doomed, the rain forests were being destroyed and we wouldn't be able to breathe again.  Zero population growth or ZPG was preached high and low.  Vitamin C is good, Vitamin C is bad.  Salt is terrible, Salt is not so bad.  Science, it seems is never settled.

Paul Ehrlich wrote a book in 1968 called the Population Bomb.  I will give you my synopsis of the book.  Ready?  Our earth cannot possibly sustain the amount of people on it.  India will never be able to feed  itself.  Have less children or we are all going to die.
Yikes!
That probably won't make the recommendations on Amazon but that's as short and succinct as I can make it.

The message from the world is this, there is no solution.  It seems the world wants you to feel hopelessness.  The frustration we feel comes from the fact that we inherently know there is truth and we yearn to find it.  Adversarial forces count on you not finding truth, always trying to keep you off balance, out of alignment, off kilter by constantly trying to convince you there is no solution.  And that means no real truth which leaves you with no real hope.
Little children are always asking, "why?" because they are instinctively searching for the truth.  Our souls need truth, truth is peace... (Another instinct of course is the urge to suck but that is another blog for another day.)

I want to get back to Paul Ehrlich who said India could not possibly feed itself.  Couldn't you make a case easily for that?  How do you feed 1.2 billion people?  Paul Ehrlich felt it couldn't be done and could not even conceive of a solution for it except to have less children (bad pun, sorry)  But then along comes an agronomist named Norman Ernest Borlaug.  He invented dwarf wheat that was disease resistant and well, short.  Taller wheat took up more room in the field because as it got taller the wheat would fall over from its own weight. Dwarf wheat takes up less room because it didn't fall over and they could double the yield.  By doubling the yield Borlaug saved the lives of a billion people. Think of that. 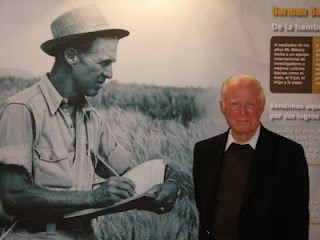 As an aside, Borlaug was one of seven people to have won the Nobel Peace Prize, the Presidential medal of Freedom and the Congressional Gold Medal.  He was also awarded the Padma Vibhushan, India's second highest civilian honor.  That's a good days work.

So Paul Ehrlich a PhD wrote a book predicting the end of the world and scared people to death, because he lived and thought small.  Norman Borlaug, also a PhD looked at tall wheat falling over in a field taking up a lot of room and  simply invented something that would take up less room.  He fed the world because he saw possibilities which led him to a solution.

My message is simple, there is always a solution.  Doesn't that bring you more peace than, "You can't get there from here?"

Here is your first step, start believing it.  Think of Norman Borlaug and the solution he found.  It wasn't just because he had a PhD that he was able to develop dwarf wheat, Paul Ehrlich has a PhD and all he has been able to do is frighten people.  You don't need a PhD to solve your problems.  But you do need to believe you can.

What tall wheat is getting in the way for you?

Take that first step in believing you can solve your problem, and then watch doors open.

Remember whatever God you pray to is a very big God who can help you develop your own dwarf wheat. You can't do it alone, but with Him you can do all things.  And if you don't believe that, I bet you would like to believe it.

Posted by Donna Tagliaferri at 2:13 PM 6 comments: Links to this post