The best part about my writing is I can write about anything.  I am certainly not making a living at writing so whatever goes from my head, to my fingers, to my keyboard is a luxury of real free speech.

Emphasis on the free.

Stevie Nicks has a new album.....I love that rockers never quit.  Really good ones just don't seem to stop.  Maybe they have so much energy that they keep going despite themselves.  Like some rocker aura takes over and they are powerless to stop it.  For the record, I am not obsessed with Stevie Nicks, she simply transports me to a very carefree time in my life.  I was that girl on the front row at the Aladdin....with nothing in my head but how much tennis I was going to play the next day, just listening to Stevie Nicks.  I worked at the tennis courts at Caesar's and I remember laying out by the pool (we had access to everything in the old days) and thinking, "Man, if I couldn't do this everyday Las Vegas would be really boring."  I was also psychic in the old days.

So that is where Stevie takes me...... to my "Inner Diva" at almost at a moments notice.

Next thing....I have started using Essential Oils.  If you haven't looked into them, you must!  I had this thing on my leg....kind of a barnacle.  The doctor had already told me it was just getting older and it wasn't dangerous, but this last summer it seemed to grow.  And since I didn't want to end up on the learning channel with a 60 pound tumor I decided to have it removed.  But I am so lazy that instead of making a doctors appointment I reached for a thimble sized bottle of Frankincense (a friend had given it to me - not sure why - ) and I rubbed that bad boy on it.  I had been told it would work on skin things, Funny when I think of skin things I always think of Frankincense.  Isn't that your go to remedy?  Well I used it for four days.....repeating that....four days. It just came off.  After years (I told you I was lazy) it came off by using an oil I thought was made up.  Abandoned in a pyramid maybe....but no it is still around.  And it smells like old stuff, like my Grandmother's attic.  But it also smells familiar, which is a little weird.  So after Frankinscense made that miracle change on my leg, I have since decided there is something to this.  In our current world situation (yikes!) thieves oil - a very cool essential oil - is being ordered by the ship load.  The  story behind thieves oil is very interesting.   There was a group of thieves during a European plaque outbreak that were robbing the dead or the sick.  After being caught they offered to exchange their secret recipe, which had allowed them to commit the robberies without catching the disease, in exchange for leniency.  So why not give this blend of oils the coolest name?  They did, thieves oil.  I kind of love that, its like pirates.  So I have been learning as much as I can absorb (absorb!! Oils!!  Pun!!) from a dear friend who has been studying oils for 35 years.  A long time ago she had kidney stones and wanted to find a natural way to fix them.  She was successful and has been teaching about nutrition, oils, muscle testing if you can name a natural way to heal, she knows about it.  She is a self professed "Buffalo Woman".  Her husband gave the nickname because he likened her strength to an Indian Woman, a Buffalo woman.
I like that too....it's right up there with Pirates and thieving plague pillagers....without the stealing and pillaging.  So when your friends start talking about essential oils, don't think they are nuts.  A bottle of Frankincense is way cheaper than all the doctor visits I would have had to make for the same result...And I use peppermint, and oregano, and lavender....and something called Ocotea.  That's right I am practically a Shaman.

Now for the 100,000.....as in page views.  Tonight I should go over 100,000 page views on my humble little blog.  It's not really a big deal since some of my blogger friends do that in an afternoon. I say it to the writing demons who have bullied my muse for years.  For years I say!!!!  For years I have listened to the demons who have told me not to write...waste of time, what do you get out of it?  Are you paid?

No more!!  Get behind me satan!! And take your little nasty minions with you.  I have the ghost of William Wallace on my side.  William Wallace doesn't care about my blog, he doesn't care if I have a teaspoon of talent....he only cares about my freedom!!  I am free to write and fail, or write and succeed...or the freedom to not write at all.  Here's to our freedom.  Enjoy it....you are the only one who can give it away.  Unless you are in a Turkish prison.  (Wow, remember when Turkey had the worst prisons?  It's a spa day now...) 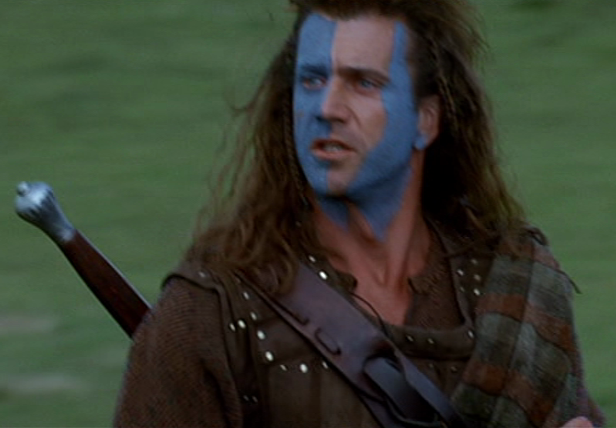 Posted by Donna Tagliaferri at 6:52 PM 33 comments: Links to this post