"The Quality of Mercy is Not Strained..." 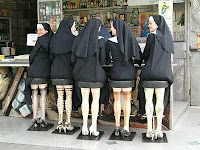 I apologize to anyone who might be offended by this picture (if you look closely you can see the legs are just legs attached to the stool, not actual Nun legs)...It's a pretty funny picture that made me remember an incredible nun from my far away past. Sister Mary Rose. When I moved to Las Vegas from Kemah Texas I had never met a nun before, so how was I to know one could impact my life so profoundly?
After we moved to Las Vegas my parents decided I wasn't weird enough as the only 14 year old with a loud Texas twang and, did I mention LOUD Texas twang?...in Las Vegas.. So they sent me to Catholic school to insure my feelings of awkwardness. All of the kids at Bishop Gorman High School had gone to school together since kindergarten so my chance at making even one friend was pretty slim. School hierarchy is a difficult system to overcome. I remember once in second grade when a new kid moved in from Tennessee we stared at him for a week. His dad was a NASA scientist but we all thought the coolest thing about him was that he was from Tennessee!
Sister Mary Rose was the oldest nun at Gorman, dean of girls and teacher of great classics in English. The impression she left on me was immeasurable. She is the reason I started searching for religion...because of her devotion I wanted to find something to believe in as much as she believed. I think Sister Mary Rose would have laughed at this picture.
Sister Mary Rose decided we were smart enough and she was brave enough to read the "The Merchant of Venice". I was amazed at how I felt reading that play. I didn't know anyone could put words together like that. And for the first time I realized what could be conveyed with just a few simple words arranged on a piece of paper. I didn't know that words could make you feel things spontaneously. It was magic.
Sister Mary Rose was serious about Shakespeare. We read every day, we looked up words, we researched the history of the time, and we learned about the Jewish religion when Shylock came into the play...we studied Venice, and I found out that women could be named Portia. And then of course we memorized. We memorized lots of things but I remember this from my first Shakespearean play......Portia calls for mercy for Antonio to Shylock.....

"The quality of mercy is not strain'd, It droppeth as the gentle rain from heaven Upon the place beneath. It is twice blest: It blesseth him that gives and him that takes."
It was magic.

That same year we studied "a Midsummer's night Dream". A character in that play is one I have loved ever since. ......Puck....I wanted to be Puck then, and I want to be Puck now.
Puck is the wild card, he is outrageous....he is pure crazy fun. Who wouldn't want to be known as "pure crazy fun?"
So that is what Sister Mary Rose did for me...she introduced me to my favorite author. She added something to my life that never left me....and all these years later I can still recite..."the quality of mercy is not strained......"
We never know the influence we can be on other people, my advice is to first, always behave....it has been my experience that when you least expect it someone will spot you from across the room, walk over and say, "aren't you Minnie's granddaughter?" And when that happens you better not be up to something.
I would love to be an influence on someone the same way Sister May Rose was for me. I know she would be happy that I found a religion I can be as dedicated to as she was to hers. I know she would be pleased that I have gone on to read lots of Shakespeare....and I hope she knows how grateful I am for her patience with a goofy Sophomore that read Shakespeare with a loud Texas twang.

Posted by Donna Tagliaferri at 11:57 AM 7 comments: