Untangling the mysteries of life...


I watched an amazing movie this afternoon.  Amazing movies inspire me to do great things.  The movie evoked emotions in me that made me feel powerful.  When I get the feeling I can do anything, over come any obstacle, climb every mountain I have to write it down.

Unfortunately, my default emotion seems to be a bit opposite of "can do." and more like, "that would be great  but here are a million reasons why I can't"

The answer to that is simple, we are unemployable-recession-victim-folks with no other options.

So in the words of my uncle when I was afraid to give the eulogy at my mother's funeral..."Donna, get on out there, you are made of better stuff."  Or as my Aunt would say..."Donna get out the butt-kicking machine and get it done."  Tough folks.

The movie I watched today was called "Freedom Writers".  As a person in love with words it really struck a cord.  Their stories told in their words gave them freedom.  They thought no one understood their lives on the streets with drugs and gangs until one teacher showed them a better way.  First she taught them about the holocaust and the biggest gang in the world, and how it started.  The pattern was the same...and they began to see, little by little that other people had problems, terrible problems.  But  they still prevailed.  And so could they, and they did.

Sometimes we see our problems as obstacles we cannot get around.  We need to jump on top of those problems and look around.  From that vantage point we can see what others are going through.

1.) See we are not alone, the negative voices in your head will always tell you, it is just you - you are the only one with this problem.  For years I thought we were the only ones in the country with money problems.  That's right, all those commercials on TV about mortgage problems were made just for me.  All the self help books in the library?  That's right, written just for me.  No one else needed them.  Being alone with failure is a bad place to be.

2.) See how other people handle their problems.  There aren't a lot of different solutions to problems, it's usually pretty simple...we need to see ones that will help us.

For four years I was in charge of about 160 women in my ward (parish, local church, ashram).  It was my stewardship to give them hope and encouragement through illness, marital problems, children problems and financial problems.  I found most situations fell in among those four areas.  I sat with them as they cried and told me there was no hope, no way out, no solution....but if I could get their attention, have them hold their fear at bay.....some could see solutions.  Doors would open, faith once tried was strengthened, and that problem became a strong place in their life going forward.  Facing fear straight on is not a cliche.  I wanted them to grab fear by the lapels.  If they let fear rule their lives, they stayed in the same place, feeling the same negative emotions over and over again.  You have to let go of the side of life's pool and just swim.  It isn't easy to let go... I know because I was not willing to let go for a long, long time.  Going through my head was the well rehearsed negative speak I was great at.

You can't do it

You are too old

What makes you think you know enough to do that?  Who would ever hire you?

A friend would tell me if the voices in your head give you peace then it is truth...If the voices make you anxious or afraid, then it isn't true, it is just a thought and thoughts aren't real.  None of those thoughts ever gave me peace, so I replaced all of them with these;

Since I am older I will be strengthened.

If I don't know then I will find the solution.

And you know what?  I started to feel peace.

There is a dove on my lanai who sits on her eggs no matter what.  She is driven by some intangible instinct to hatch those eggs.   We have had 100 degree heat, 70 mile an hour winds, rain with a few lovely days.  And yet she remains.  There is no doubt about what she is doing to me or to her.  I have not one time wondered if she would still be there.  I know she will,  it has never occurred to me she would give up and fly off and leave those eggs unprotected.  For her failure is not an option.  She puts her obvious fear of humans completely aside to sit on those eggs.  I wondered, "has she ever done this before?  And if so how does she know what to do?"  But she has figured it out and does it...day after day.  And here is her success... 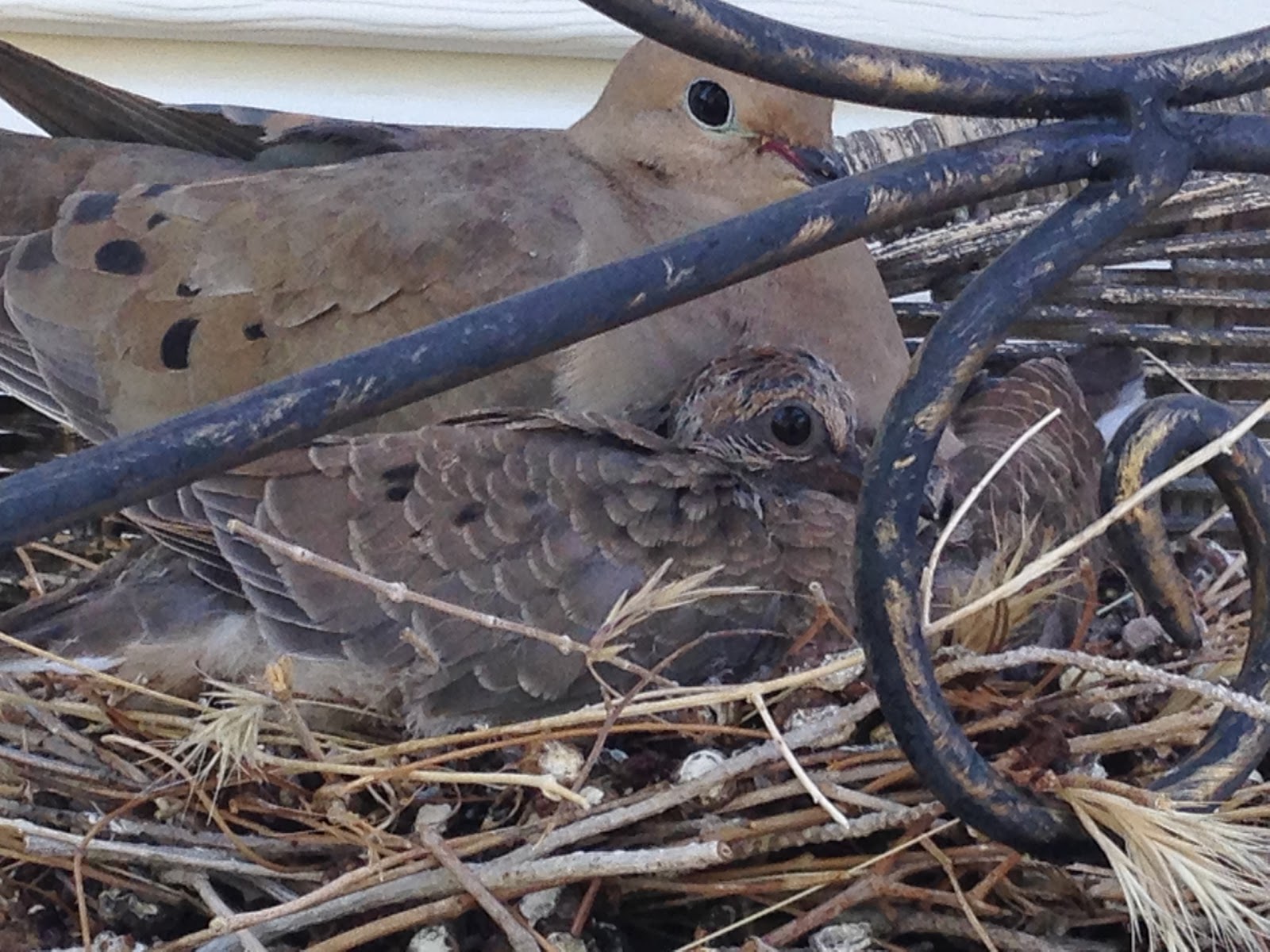 I took a lesson from this sweet bird about overcoming obstacles.

You may have never done it before, so what, do it!

Trust your instincts, trust the light that is in you.

Had it not been for my time with the women in my ward I never would have been able to see my own insecurities and fears.  I had to confront them in order to start a path to joy.  And they showed me how.

However it has not been easy.  My default mindspeak is..."give up, sit by the side of the wagon and let the wolves eat you"  and that would be easier.  But growth isn't easy, don't they call it growing pains?

I am living proof that almost-senior-citizens still have growing pains.

Fear be damned....full speed ahead!!