I discovered adoption doesn't always work when you step outside your species. Maybe it works sometimes...you hear about the dog who adopts an orangutan. Or the hippo who adopts the tortoise...The animal world is a crazy place. They seem to blend seamlessly..... 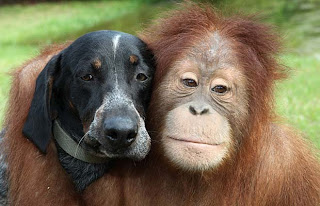 When last we met I was trying to find someone, anyone, to help me with the 5 baby birds that were suddenly my responsibility. I did everything everyone suggested, I waited for the mother to return...she didn't. I called the local bird sanctuary....they were useless. They practically screamed into the phone....No! We do not know what to do, and No! We couldn't possibly give you any advice.

I hope they don't need any donations in the future. And at my first opportunity I will expose them for the impostors they are...sanctuary indeed.
My dear neighbor Cris told me to feed them meal worms. Meal worms? I couldn't find meal worms, but Cris found them at Wal-Mart. Yikes...
After we bought the meal worms I just stared at them for awhile...they were disgusting. How do I get the worms from the Styrofoam cup to the bird mouths? The worms needed to be smaller than they were, so I crushed them up and used my tweezers to put it in their mouths. I discovered a few things, my gag reflex and baby birds do not like to be held. Well, duh, mother birds don't hold them. And, wow, baby birds aren't above being pushy when it comes to food.
So I fed them, a lot. And they ate, a lot. And often...real often.
I was now the surrogate mother to five starlings, which oh by the way, turned out to be sparrows... I spent a great deal of time thinking "I am going to go through all this bother and work and get attached, and then they will die", mainly because I am a human without the ability to regurgitate insects and they are, well ......birds.
What am I doing and what do I know about birds? The truth is I knew less about birds than I thought. Through the bird grapevine I found out that sparrows eat every ten minutes. And that they are fed by both a mother and a father. I had no idea the family dynamic was so in tact in the small-bird world. After being with them for a few days it made sense to me to have a kind of tag team approach to whole affair. It was exhausting!! And this bird couple had been quite prolific. Mother Sparrow laid 5 eggs and all 5 hatched....the rest of the nests on my porch are underachievers comparably speaking. There are 3 eggs and 2 eggs respectively...it had to be this group that fell out of the tree in front of my door.

So there I was....doing all I could to keep these little birds alive. A friend (thank you Jan) lent me a bird cage, my husband attached a light to the cage.....everyone really tried.

All of our intentions were great....but one day 2 of them died and then the next day the rest of them died. I wasn't nearly as effective as I was hoping to be, and it was really sad.

The experience caused me to wonder why I cared so much. But then I saw it was simple, it was life...and protecting life is inherent in all of us. Nothing more profound than that.

I realized again that life is valuable, and for that I am grateful to have had the experience.

Posted by Donna Tagliaferri at 4:36 PM